Our business want to assign workflow roles from Task Inbox.

Scenario : we have a complex workflow, and created 50 to 80 different teams(approx) to assigned to that workflow roles.

And they are changing this teams frequently. it's difficult track those changes. And it's Manual work, often forgot to do changes.

They want to assign this team from Task Inbox.

yes we can do this in Activity Roles Tab or Project Roles Tab, but we can't gave full user access to everyone.

This functionality will be available in PM release 100 without a feature flag. The screenshots that Eric added below show the functionality. You would have to modify the Role Assignment panel (screenshot below in Eric's comment) and validate/promote the workflow template again to see this appear in inbox.

A few notes/reminders of what Eric posted below:

In Progress
Eric Teitsma 1 year ago

With the initial release of this feature it will support two configuration options for what users can be selected.  When configuring the task in the template designer, the user will be able to set whether the role will be required and can set whether the users to select will allow All Users to be selected or if it should limit the choices to ONLY users assigned to the specific role being selected.  Here is a screen shot of the configuration page.

As you can see, on the Page Layout tab there will now be a third section visible under Step Checklists that will allow you to configure the specific Roles to display on the task and what options can be selected.

On the Task, inside the Task Inbox this will display as a new panel call Role Assignment. 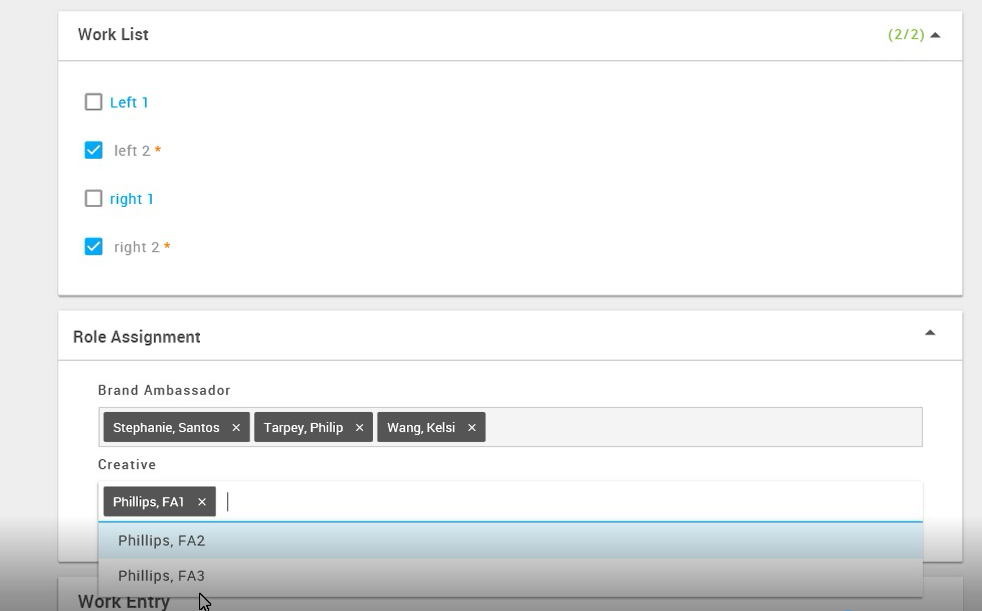 The role field is a multiple selection control that supports type ahead filtering for finding the user(s) to select.

The development for this feature is in progress and we are targeting a release of it to customers in September, 2019.

Do you have a date on this one for early adopter or when it will be behind a feature flag?

Hi Brad, guessing you did not see my last line above. :) It is targeted for release to customers in September this year.  It will not be behind a feature flag.  Since it is all tied to configuration settings, nothing will change for a customer when this releases unless you go and updated steps to show roles in your workflow templates and promote them.  So the only users who would see this feature initially when it releases would be users with Workflow Admin rights.  They will now see the new "Role Assignment" section on the page layout tab.   So there will be no need to request to get this, it will just release to all customers when ready and then you can configure it into your processes where appropriate.

Great news!  This feature is already on our roadmap and planned for development this quarter.  However, I want to be clear on the scope of what we are developing at least for this initial feature work.

In the Page Layout section when defining a Step in the workflow designer, there will be a new section for "Roles" similar to DCT and Checklists.  Within this section will be the option to select specific roles to display on the task.  It will be a dynamic row list so you can add multiple rows for each role you want to display.  You will be able to set whether the role will be required and you can set whether the options to select will allow All Users to be selected or if it should limit the choices to ONLY users assigned to the specific role being selected.

When the task is then viewed within the Task Inbox, a new panel will show titled "Roles" and any of the roles you configured would be shown in that panel and the Task assignee (including Contributor licensed users) will be able to select a user(s) for that role.  We are only allowing you to select Users and not Groups or the tokens like <Project Manager> as we do not feel that fits this use case. It will be a multiple selection field so a user could select more than one person to fill a role.  When the user updates the field it will then update the value for that role on the Project role.  This change will only update the Project role, not the Activity Role, since this user is doing this on a specific task in a specific project it make sense to limit the context of the change to only be for that project.

The intent behind this feature is to allow a user to pick the person who will be performing a specific role for the project.  So allowing a few specific roles to be assigned by someone working in the project but not replacing the need for a project manager to define the overall roles and resource management of a project.

So while you could put all roles onto the task and then assign that task to the Project Manager to assign, we do not recommend customers do that unless the project is very simple and only has a couple roles overall.  If you are a full user who is managing the project, then that user should still leverage the roles tab to manage this and use all the aspects like applying teams, groups, user tokens, etc.

Hi Eric,
Will this feature still give the ability to select any person in the system? In the roles configuration tab for full users today, the selection of user is by default limited by their 'user role' (user profile). Unfortunately, a user can only be assigned to one single role in security administration, but can often be involved in multiple different activity level roles. Please consider the concerns described in https://voice.aprimo.com/communities/42/topics/1060-user-account-to-be-able-to-have-multiple-roles-selected E.g. we often see that a user who is a designer can in one workflow be involved as the 'uploader' of a design and in another workflow be involved as 'reviewer' of a peer uploaded design.

Even better would be to have a configuration option in the workflow designer, to define criteria of pre-filtering on what users the contributors can select for each of the roles in the above proposed new task inbox functionality.

The functionality you described here sounds like a great improvement that our users would benefit from. Has there been any consideration around a way for a task assignee to reassign the current task they have to someone else (or add additional users to the task they have assigned to them) through the Task Inbox in a similar way?

This would help in scenarios where an incorrect user was selected for a role or simply to increase flexibility for workload/resource utilization purposes. If a task is assigned to someone who doesn't have bandwidth, the fastest & simplest way for them to have the task assigned to someone else would be to reassign themselves through the task in their inbox (as opposed to through the Task Worksheet or email request to an admin depending on business process).

That is the intent behind the delegate task feature.  Does that not work in this case?

Sorry Eric - this was a gap on my part. I hadn't used the Allow Task Delegation option previously and was under the impression it was only available through the Task List view. Since the ability to delegate is available in the Task Inbox already you can disregard/delete my comment.

I hear this business case from multiple customers as with the move to agile workplaces, team members are confirming their own assignments, not managers.    Specifically, a task gets assigned to a group of team members all of a same role and the user that accepts the task, should be automatically assigned to that Project / Activity Role.

Capability to allow users to assign user roles while executing a task in the task inbox. Users would remain on the task and have the ability to select one or more resources (users) and the system would automatically populate specified resources in activity/project “role” upon task closure.